By Bahador Kiamarzi, hunger striker in camp Liberty and victim of Human Rights violation in Iran 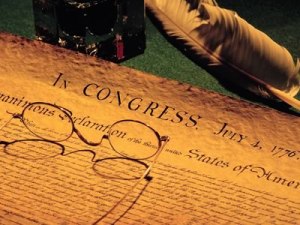 You might be taken aback by this question. So allow me to explain my life story in brief. You may find out the reason I have asked this question.

I am Iranian, but I know much about the US Declaration of Independence, especially the part that stresses on freedom and right of people to oppose and rise against dictatorship. Your forefathers fought and sacrificed their lives to achieve this invaluable document.

My name is Bahador Kiamarzi, industrial engineer and one of the hunger strikers in Camp Liberty. I’ve been in this camp – or better called prison – for 16 months based on promises and guaranties given by US and UN. You might ask why I chose to go on hunger strike and accepted its consequences.

My father and mother were supporters of PMOI. After the 1979 revolution, they distributed PMOI newspapers in the streets of Tehran. That was all it took to have them arrested and tortured by the mullahs’ regime. I was born in prison, where I spent the first four years of my life. My father had an 8 year sentence, but he ended up being executed in 1988 along with 30 thousand political prisoners. My mother, too, spent 8 years in the notorious Evin prison. My 19-year-old uncle was executed in 1981 merely because he supported the PMOI. The mullahs’ regime never returned the bodies of my uncle and father to us, analogous to Maliki’s refusal to return the bodies of 52 victims of the September 1st massacre. The victims of the 1988 mass execution in Iran were buried in mass graves. I always regretted not knowing the location of their graves to be able to visit them and pay homage.

The Iranian regime never allowed me to visit my father when he was in prison. Only once, my grandmother and I were given permission to visit him in Gohardasht prison. I still remember seeing a man standing at the end of a hallway. My grandmother pointed at him and said, “He’s your father”. I was happy and proud to have a father just like other children. Impulsively, I ran forth to hug him for the first time in my life.

Before reaching him, a guardsman pushed him inside a cell and closed the door. I crashed into the door and fell to the floor.

That was the only time I saw my father.

After a time, they never allowed any member of my family to visit my mother either. I almost forgot her name and only vague pictures of her remained in my mind. The only clear memories that I had were the times she was tortured before my eyes when I was three-years-old. Those sounds and images were vivid in my mind.

After her release, the mullahs’ regime confiscated all our properties and belongings including home, car and savings.

As I grew up, I was always under pressure by Intelligence Ministry (MOIS). They expelled me from school and used any excuse to persecute me. Our house and phone was under constant surveillance. Even though I was twice accepted to go to university, they didn’t allow me to enter. They said, “Your family has political complications.”

Finally, they were forced to allow me into university because of my high grades. In 1999, I was planning to join the PMOI but was arrested by the MOIS. They threatened to arrest my mother again and torture her.

Pressure on our family was increasing daily. Witnessing the street executions, poverty, and harassment became unbearable. Even though it was very hard for me to leave my family, studies and job, yet I finally decided to join the PMOI, the only hope for the Iranian people’s salvation. Afterwards, my mother was arrested again and severely tortured and threatened to be executed. Her only crime was that I, her son, had come to Camp Ashraf.

Today, I find myself in prison again, one that is ironically called camp Liberty.

In 2009, the US government – who had promised to protect us – decided to put aside all its promises and agreements and hand over our protection to Iraqi government, which carries out the policies of the mullahs’ regime.

Since then, we’ve been living in prison-like conditions. The Iraqi government’s methods are not so different from what I’ve witnessed in the mullahs’ regime, and these past 4 years have been filled with deadly attacks and psychological torture.

Our displacement to camp Liberty, which was done with yet more promises and guarantees by the US, was supposed to improve our humanitarian conditions, and provide us with security and safety. But, in practice, conditions have only worsened and two missile attacks on the camp in the past year have cost ten people their lives.

In the last attack on camp Ashraf, which took place on September 1st, the Iraqi forces executed 52 of my friends while their hands were tied behind their backs, and they abducted 7 others, including six women. Again, the US government failed to fulfill its promises.

Today, we have been left with no choice other than to participate in hunger strike.  Perhaps this way, the US government will finally come to its senses and decide to stand up to its commitments and obligations, to put pressure Iraqi forces to release the 7 hostages and provide the security of camp Liberty residents through UN Blue Helmet forces.

We are seeking peace and democracy in Iran. Are we not entitled to it? The US declaration of Independence says so.

Have you read it, Mr. President?