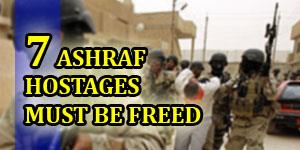 In reaction to the constant disclosure of information and details by the Iranian resistance, confirming that the seven Ashraf residents taken hostage are still in the hands of Maliki’s forces, the clerical regime and Maliki have resorted to a joint scenario of dissemination and disinformation, aimed at falsely convincing the US and UN that the hostages are not in Iraq and had been transferred to Iran from the very beginning. The goal is to:

1-    Reduce international pressure and give Maliki the freedom to kill or extradite the hostages.

2-    Save Maliki and his cohorts from legal and political consequences for this heinous crime against humanity.

Iranian Resistance has credible documents and information and trustable witnesses that prove that the massacre in Ashraf was perpetrated by personal orders from Maliki and his Security Advisor Faleh Fayaz at the behest of the Iranian regime and that, to this day, the hostages are in control of Maliki’s special forces in Iraq. These documents and evidence are presentable to any court of law and the witnesses are prepared to testify if their security is guaranteed.