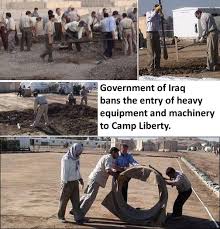 Two weeks ago I went out of my trailer to see a football game, and only meters away one of my crutches went on a large stone on the road and I fell to the ground. I couldn’t move at all and my friends came to my help and took me back to the metal trailer that is scorching hot in the summer and freezing cold in the winter, making it completely useless. From then on it has been two weeks that I have been stuck in my trailer.

Around 3 years ago under an agreement signed between the United Nations and the United States government – who were officially responsible for our security – me and 3,000 other residents were transferred from Camp Ashraf, home to Iranian refugees located 90 kilometers north of Baghdad, to Camp Liberty, where US forces were formerly stationed near Baghdad International Airport. First of all, we were told that Liberty is a “Temporary Transit Location” and we would be resettled in a matter of weeks, if not a few months max. I am one of the residents injured during the Iraqi government forces’ attack against Ashraf on 8 April 2011, and I trusted these pledges. However, it has been three years now that I am here in Liberty, where in contrast to its name it lacks even minimum standards needed for an ordinary life: no roads, no football fields and … considering the status of the roads here that are made of gravel and stone, I cannot even walk around without my knee swelling again. If I don’t rest my knee will start bleeding and get infected, placing it on the verge of being amputated.

I was sleeping in the trailer. From the sound outside I realized that the other guys had started another football game. Each team here has chosen a name after Iran’s various cities and one of the teams is Perspolis. Hearing this name and the excitement and chants the guys were yelling I remembered the scenes of Iran where the two archrivals ‘Esteghlal’ and ‘Perspolis’ would clash and large crowds would gather at Tehran’s Azadi Stadium, where I would get so excited about the thrill of the crowd.

I was lost in these thoughts when one of my friends who knew my love for the ‘beautiful’ game came to my trailer and insisted I go and watch the game. This time he had me sit in a wheelchair to go.

When my eyes fell on the football field I told myself: Way to go guys! Look at your spirits that despite all the shortages and that we are deprived of everything in Liberty because of the logistics siege – they have even banned any kind of ball or any other sports goods from being delivered to the camp – you have still started this game. Then I remembered the first days in Liberty where we had nowhere to play football or volleyball, and everywhere was full of gravel. The Iraqi government forces stationed in Liberty would not allow us bring in sand and cement to build sidewalks or asphalt the roads in Liberty. This forced all Liberty residents to resort to harsh labor with very minimum tools that looked more like those used in the Stone Ages, to make fields where we could play football and volleyball. Hours after hours, day in and day out the residents did the work of heavy machinery. This question came to my mind that is this not a refugee camp? Then why don’t the Iraqi forces allow us asphalt all the roads in Liberty, and have heavy machinery brought in to build even limited roads for those injured residents like me that are suffering from being maimed…

Why has it been 12 years that we are under house arrest? Why have we been attacked 26 times by Maliki’s government forces in the past 8 years in Ashraf and Liberty, all resulting in 136 residents’ murdered, 1,375 others injured and seven abducted as hostages?

I found my answer in all the cheers and enthusiasm I saw from the guys. Liberty residents are not only the sole alternative of the mullahs ruling Iran, in fact they are the solution to all the crises the Middle East is facing today. That is exactly why the Iranian regime, in collaboration with its loyal forces left over from the former Iraqi government, are placing all these pressures on us and depriving us of even medical care to an extent that in recent weeks one of my friends by the of Mr. Taghi Abbasian died for not receiving the treatment he needed.

Of course my friends and I have always been and are ready for any sacrifice and price needed in this struggle, and during the past three years we have through our perseverance shown the international community the most dangerous enemy of mankind in this day and age. Of course, this has come with a price and we have sacrificed 120,000 of the best of the best Iranians for this cause. We are proud to be at the front lines of this battle against the fascist mullahs’ ruling Iran, and yes, we will give our all, again and again, day after day, because we are confident this is the path to freedom for Iran.  We ask for our minimum right and we should be able to purchase our needs, just like any citizen, and most importantly, seek medical treatment in any hospital, and also see our lawyers.

The football game I mentioned has now come to an end here in Liberty, and with the help of my friend I returned to my metal trailer. While I was lying on my bed, tired after a long day, I fell deep into dreams of building a free Iran of tomorrow, full of standard stadiums and the best sports facilities for all Iranian boys and girls. These dreams actually lessen my pains and I am proud and my head is high even after losing my leg in this struggle against the fascist regime ruling Iran.

Yes, I am certain that through our struggle and solidarity, we will annihilate the source of fundamentalism in Tehran, and bring about peace, friendship, love and tolerance not only to Iran, but also the war-stricken Middle East.