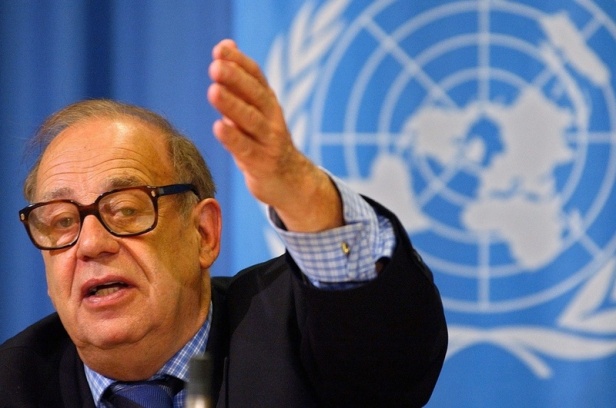 Mr. Jean Ziegler, member of the Advisory Committee of the UN Human Rights Council has called on the United Nation to station Blue Helmets to protect Iranian refugees in Camp Liberty who are facing danger in Iraq.

Mr. Ziegler told the Swiss TV channel Leman Blue on Wednesday: “We in the United Nations Advisory Committee of the UN Human Rights Council have two demand: Firstly, we want the United Nations to launch a credible international investigation into the massacre in Camp Ashraf which left tens killed. Secondly we demand that the UN Blue Helmets provide protection for the residents of Camp Liberty whose life are in danger daily.

Mr. Ziegler made the comment in an interview as he was accompanying Mrs. Maryam Rajavi, the President-elect of the Iranian Resistance visiting an exhibition in the Palace of Nations (Outside the European UN Headquarters) which honored the memories of those killed in massacres in Middle East including the 52 members of the Iranian opposition, the People’s Mojahedin Organization of Iran (PMOI/MEK) on September 1, 2013.

On the same day, Mr. Ziegler attended an international conference held at the European Headquarters of the United Nations in which Mrs Maryam Rajavi called on the United Nations and the U.S. to honor their commitments to safety and security of Camp Liberty residents.

Mrs. Rajavi expressed hope that the ouster of Maliki “will lead to the total eviction of the Iranian regime from Iraq, putting an end to the suppression and the violation of the rights of Iranian refugees in Camp Liberty and guaranteeing the residents’ safety and security until all of them are transferred to Europe or America.”