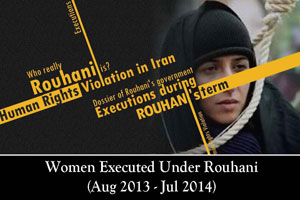 The women’s committee of the National Council of Resistance of Iran published its yearly report on the execution of women in Iran under Hassan Rouhani as part of the gross violation of human rights under the “moderate” president of the clerical regime.

The report published in the official website of the NCRI Women’s Committee, contains details of 22 women who have been executed during the past year, many with their name, date and place of execution.

Based on this report Hassan Rouhani’s government has publicly announced the execution of six of these women and the other 16 have been secretly executed in various cities in Iran.

Under Hassan Rouhani the suppression of women in Iran has further intensified and in much larger scales by imposing gender segregation in workplaces, concerts, and universities.

Recently a group of 183 members of the regime’s parliament ‘have supported a plan by Tehran Mayor Mohammad BaqerQalibaf to segregate female and male employees in Tehran Municipality.’ They said the measure provides “special attention and respect to women”.

An example of such plan is the directive ratified in the council of mayors and their deputies on 17 May 2014 says: “all senior or median directors should use only male employees for posts such as chief of bureau, secretary, phone operator, typist, and in charge of follow-ups…” (state-run news agency ISNA, July 16, 2014).

In the course of implementation of this directive, women were banned from holding some posts in the municipalities and lost their jobs.

In line with this policy of gender apartheid, Tehran municipality is planning to designate separate benches to be used by boys and girls in public parks. Also some universities are imposing new measures to prevent social interactions of male and female students in campuses.