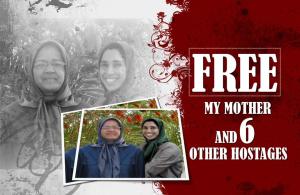 My mother, Mahnaz Azizi is one of 6 women abducted in Iraq by Special Forces working for the Prime Minister Nouri Maliki. I’m sure you’ve seen the scenes published on internet of an attack showing how Iraqi Forces raided a residential camp of Iranians September 1st. During this deadly and vicious attack, 52 residents, including young people, were shot in the head and executed. Others were killed while lying injured on the clinic beds.

At the same time 6 women and 1 man were taken hostage from their home in this camp. 42 eye witnesses who survived this atrocious mass murder have told me how attacking forces raided the camp and abducted the hostages. Later information obtained from reliable sources indicates that they are being held in safe houses in Baghdad international airport under the direct supervision of the Iraqi Prime Minister’s office. They are kept in isolation so no trace is found of them. The hostages are under constant pressure and interrogation and are being tortured. A contingent of the Iranian regime’s terrorist Quds force has been dispatched to Iraq for this very purpose.

The United States and United Nations are responsible for the safety of my mother and the other hostages, all protected persons under the Fourth Geneva Convention and Persons of Concern according to the UNHCR.

In a hearing session held on October 3, 2013, Senator Robert Menendez, the chair of the Senate’s Foreign Relations Committee said to the representative of the US State Department, “let me echo what Senator McCain has said in this regard. I have put out a statement in this regard and have also talked to our Department. You know, America went to MEK and we said disarm and we will protect you. And then we ultimately left and that protection has not been there.”

In the same session, Senator Menendez warned the representative of the State Department, saying, “And let me also caution that the seven hostages, which we believe the Iraqi Government knows where they are, should they die it would be complicating matters.”