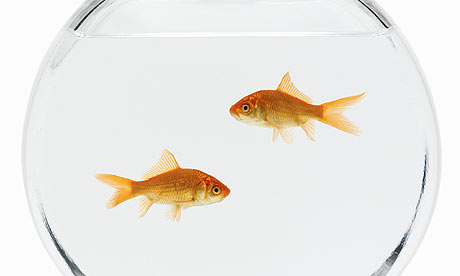 Once upon a time, there were some gold fish who found themselves in a big glass bowl ready to be shipped.

“Where are we going?” asked one of them.

“Nobody knows,” nagged the other.

“I know,” yelled a little fellow from the end of bowl who heard the dialog. “We are going to Iraq.”

“No idiot, we are going to Iraq to Camp Liberty to be with residents celebrating their new year,” answered the little one.

“Ok. Hurray,” shouted all others.

All the gold fish turned silent. Some closed their eyes and went asleep trying to dream about the forthcoming celebrations. In a dark corner of the bowl, two fish kids were muttering to each other. One who had a bluish tail wondered, “We‘ve already passed the New Year!”

The other one gave him an arrogant look and said in a low voice, “You uneducated fish! Iranians have their own new year. It begins in March.”

Blue tail stared and said, “But March is the third month of the year!”

The other fish shushed him and said, “When spring starts.”

The little blue tail fish was still confused. “Can I ask another question?”

“But you won’t call me uneducated again, will you?”

The larger fish behaving as if a superior, promised not to scorn him. “Go ahead,” he repeated.

“Ok, if they are Iranians what are they doing in Iraq?”

An arrogant smile appeared on large fish‘s face, finding out he knew more about the world than the blue tail did. “I’ll explain it to you, but you have to promise not to mention anywhere that I told you, it’s a bit risky.” The little one nodded. Having received this assurance large fish began to speak.

“The residents are the Mojahedin. There is a man- eating monster in Iran called the supreme Mullah who has devastated the country, killing, torturing, stealing, lying and . . . . Mojahedin have been fighting against that monster for a long time. Many friends of these residents have been killed or are locked up in jails now.”

Little fish stayed quiet for a while, trying to digest what he just heard, but he had new questions, “If their friends are killed, so why are they celebrating now? Huh?”

A young fish, who had kept silent so far, answered this question. “What do we know about human’s life? This is a fight they continue. You can sit and let the monster eat you, but when you stand up to him and choose your own destiny, that’s a cause worth celebrating.” She then added, “And now the residents are celebrating their new year. They all visit each other and exchange presents.

“I see! But …, but why are we going there?” asked blue tail confusedly.

“Iranians regard gold fish as a sign of beauty and blessing,” said the young fish, smiling.

“Is that so?” said the happy little fish as he was drifting away to find a cozy place to sleep. And soon the silence settled into the bowl again.

It was only early morning, next day, when the heat and beautiful Arabic music tuning from outside showed that they were in Iraq. Many young fish just woke up. The uncertainty in their faces and whispers showed that many of them were still confused. Older ones tried to explain the situations to younger ones, but being in Iraq had already scared some.

By the time they reached Camp Liberty most of the fish felt tired as they had gone through several stops and checkpoints that they did not know why.

“Is there a doctor in the house?” A red fat fish repeated her question a few times without receiving any answer. “I feel awful, I must have eaten something bad.”

Seeing her pale face scared the fat fish. What could she do to save her? Many others asked themselves the same question. The water in the bowl did not have much more air or nutrition. Travelling through many ramp and puddles had made them sick.

“How far are we from Camp Liberty?” asked an exhausted little fish who could hardly keep up with the heat. His mother arrived happily as she had just found him and said, “We are there, we are at entrance gate. The Iraqi soldiers must search the truck, my dear.”

Five days have passed since they arrived at camp’s entrance. Iraqi soldiers have not come yet to check the truck. The weather is very hot and stuffy. Three fish that got sick on the way have already died. Some of the parents hide the dead so that the young ones don’t see them. A yellow fish that looked very old stumbled and tried to get himself to the top of the bowl. He needed some fresh air.

The bluish fish dragged herself to the edge of the bowl and tried to see what was going on outside. She couldn’t hide her exhaustion. She came back in a minute and shouted to the others. “You know why they are keeping us here?”

The others circled around her. “Why?” They needed to know. “The soldiers’ commander says that we are violating Iraq’s sovereignty,” cried the bluish one. Some of the fish laughed noisily.

A young fish came along, yelling, “Who is saying that? We’ve done nothing wrong!” Another young one commented, “I knew we couldn’t trust Iraq. We shouldn’t come here.”

“Do they give any reason?”

“No, they‘re just making up excuses to keep us outside.”

A baby fish rubbed himself to his mother and asked, “Mom, what is sovereignty?”

Shortly he heard his mother whispering into his ear, “Don’t believe any word you hear, my dear.”

Another four days have passed, but the fish are still at the entrance. Five more fish have died. Parents are not able to hide the dead any more .They even expect more to die soon. A baby fish who is about to cry dares to ask, “Why the residents who have invited us do not come to take us?” An experienced aged mother thinks it is time they explained everything. She goes to the corner where most kids were and starts talking to them. “Poor little innocent ones, you still have to learn that many faces don’t show what is behind them. You do not know that although it is called camp Liberty, but in fact it is a prison. The Iraqi soldiers do not let the residents to come out of the camp. The truck contains their food, but the Iraqis do not let it in.”

“You mean they can’t go out to buy food and things they need?”

“No dear, as you see this is what is happening each time they want to bring in the stuff they have bought, The Iraqi soldiers don’t even let them take all the food they have bought.”

“How about times they need to go to the doctor?”

Day 14th, they are still at the entrance trying to get in. Number of dead fish has reached to more than 20 now. The temperature is rising every day. Sounds coming from outside attracts the attention of those fish still able to jump around. A large fish that looks stronger than many others goes up and pushes his head out of water to find out what is happening. When he comes back he has a new story to tell.

“Some of the residents have hospital appointments but the soldiers are returning the ambulance back to the camp and are not allowing them to go out.”

Some of the fish, especially the kids, gaze at each other and ask why. “They don’t accept their ID cards.”

Some of the fish start protesting, “They haven’t decided about us yet? Don’t they see we are dying in here?!”

The oldest mother comes to explain again. “First they said that the driver has not been examined by the security and cannot go in, “she says with a mixture of smile and anger on her face. “It took him three days to go and renew his documents, but again the soldiers said they must search the truck completely. So another three days passed and still nothing.”

“There is something suspicious about this!” said a young mother and the rest nodded in approval. The oldest mother continued, “Iraq’s government is a dear friend of the Iranian regime.”

The kids opened the way for some aged fish. They were their grandfathers who wanted to say something. “These soldiers were supposed to protect them, but so far those grand mullahs have arranged three attacks on them,” said the oldest one. “Some of them were killed and some wounded.”

Another grandfather added, “We can mourn for our dead, but let’s help them enjoy their New Year.”

“If these Mullahs didn’t exist, we or in fact nobody would be facing these problems,” cried the third grandpa.

All the fish now were happy, wearing smiles on their faces. They said nothing more.

The driver has just started the truck. It looks they are going in. It is day 17. The truck starts moving. “At last our dreams have come true,” shouted the blue tail fish. Their happiness fades away soon, when a sudden jerk of the truck brings up all dead bodies mothers had hidden from the children. “1, 2, 3, 4,” one fish began to count them. She stopped when she got to 35.

The remaining fish and the residents both celebrated as after 17 days the food truck finally entered the camp. The fish were just realizing there are many stories about this camp, still to be learned.

The fish lost their friends, but they were so happy – they were the only living outsiders who managed to get into Camp Liberty, in the past two years.