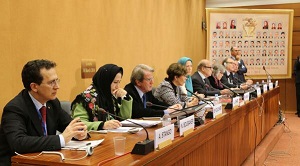 Today is the twelfth day that the Iraqi government is preventing food and medicine from entering the camp and we see no action and concern from the UN while UNAMI and UNHCR are responsible for safety and security of the residents.

On Friday, March 14, Mrs. Maryam Rajavi, President-elect of the National Council of Resistance of Iran, participated in an international meeting in Geneva entitled “Human Rights in Iran; call for International Probe into Massacre in Ashraf” at the invitation of five non-governmental organizations, including the Movement against Racism and for Friendship among the Peoples (MRAP), the Nonviolent Radical Party, Transnational and Transparty, the Women Human Rights International Association (WHRIA), the France Liberte Foundation, and the International Educational Development (Inc).

Rajavi condemned the silence and inaction of the international community and the United Nations concerning the catastrophic condition of repression in Iran and said: In recent months, at the same time as claims of moderation by Rouhani, the number of executions has reached a new record in the past twenty five years. According to reports by the United Nations’ independent Rapporteurs, since the beginning of 2014, at least 176 people have been executed. At least four of them were prisoners who were under-age when they were arrested. Nonetheless, Javad Larijani, a senior official of mullahs’ Judiciary Branch, has stated: “The world must praise Iran for increasing the number of executions.” Savage punishments such as the gouging out of an eye and cutting off the hands and feet has continued, and the execution of the political prisoners and prisoners belonging to ethnic and religious minorities has escalated in an unprecedented manner.

The internet restrictions are decided by a 13-man committee, six of whom are Rouhani’s Ministers. Suppression of women under the pretext of mal-veiling and extensive discrimination against them continues.

Rajavi emphasized: It is a huge mistake to assume that keeping silent and lack of action on Iranian human rights situation can facilitate a deal on the nuclear issue. She warned that no one should sacrifice human rights, freedom and Iranian people’s resistance for continuing nuclear negotiation with the mullahs.

Rajavi blamed the United Nations silence in face of the trampling of the basic rights of asylum-seekers residing in Camp Liberty and noted: “On numerous occasions we warned about the Iranian regime’s plan for more killing. Unfortunately, these repeated warnings have been ignored.” She reiterated that “what is happening there is a planned massacre. On one hand Maliki’s government is launching missile attacks on Liberty and on the other hand the Iranian regime is doing all in its power to prevent the relocation of the residents outside Iraq. In the meantime, harassment, intimidation, and provocations of agents affiliated to the office of Iraqi Prime Minister have intensified. And they are preparing grounds for clashes.”

In another part of her speech Maryam Rajavi appealed to the United States, the European Union, and the United Nations to refer the file of the dire situation of Camp Liberty residents who at any moment are threatened with a greater massacre, to the UN Security Council and to work for the release of seven Ashraf hostages, the transfer of all residents to the European Union and the United States, and to provide basic security requirements for the residents in Camp Liberty against rocket attacks.

She warned the United Nations that “by refusing to do an independent investigation, you are giving a green light to dictators in Iran and Iraq for more killings.”

Speakers strongly condemned the attacks by the Iraqi government at the behest of the Iranian regime against the Iranian refugees in Ashraf and Liberty in Iraq and the logistical and medical siege and called for these attacks and the restrictions that so far have resulted in the death of 116, the tormenting to death of 18 others, and the hostage-taking of seven, six of whom are women, to be immediately stopped. One of the most shocking of these attacks was the massacre of Ashraf residents on September 1, 2013. They underscored the fact that heinous acts like hampering residents’ free access to medical services, preventing the entry of foodstuffs, and stonewalling drainage of the black water tanks are blatant examples of torture.

The speakers explicitly demanded an independent, full and comprehensive probe into these atrocities by pertinent UN bodies and called on the United States and the United Nations to live up to their commitments regarding Camp Liberty residents that are currently threatened by another massacre at any moment. They underlined that the U.S. and UN are legally, morally and directly responsible for the safety and protection of these asylum-seekers who are people of concern and under protection by the Fourth Geneva Convention and they should be held responsible for any threat and danger to them.