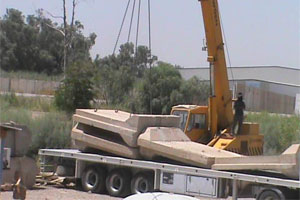 Following the suppressive measures carried out by Iraqi forces against Iranian dissidents in Camp Liberty past week, on Thursday, February 27, 2014, Iraqi forces again prevented the entrance of T-Walls inside Camp Liberty. These T-Walls were to be installed around the trailers of the residents in order to prevent them from rocket attacks against the camp. Instead, the Iraqi forces used the flatbeds and cranes, which had been rented at the residents’ expense, for their own use and in their own headquarters.

Already in the past year, the residents of Camp Liberty have undergone four rocket attacks, which have left 16 dead and more than 200 wounded in their wake. And any moment, another attack might occur. In face of all international appeals for the safety and security of the residents, including statements made by members of the European Parliament and the US Congress, the Iraqi government has made it clear that it has no intention to protect the residents from terrorist attacks and is even preventing them from providing their protection at their own expense.

Iraqi authorities are also doing their best to make the residents’ lives intolerable. In another criminal act, they denied Camp Liberty patients access to Baghdad hospitals. During the past years, the medical restrictions that Iraqi authorities have imposed on the residents have claimed the lives of 18 people, and the lives of others are in danger.

The Iraqi forces currently in charge of the camp’s security are the same forces who were directly involved in previous attacks on Camp Ashraf and Camp Liberty.

Moreover, Iraqi forces are continuing to plunder and loot the property that the residents of Camp Liberty have left behind in Ashraf. Based on guarantees and written commitments by US and UN authorities, the government of Iraqi would allow the resident to sell their property and the UN and US would facilitate its safeguarding.

But so far, the Iraqi government hasn’t allowed the residents to sell a dollar’s worth of their property and, on the contrary, is carrying out its plans to seize and rob their belongings.