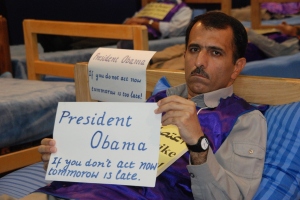 Sometimes, there is more to a crime than the one who pulls the trigger. Sometimes, the silence and inaction of others is just as bad.

Sometimes, the only means to send your message to the world is to go on hunger strike and put your life in danger. The residents of Camp Liberty have found themselves in one of those times, and it is now 72 days that they are on hunger strike.

72 days have passed since the horrible September 1 massacre in Camp Ashraf, where 52 defenseless residents were murdered and seven others were taken hostage. That crime was committed by the Iraqi forces under the command of Prime Minister Nouri Al-Maliki. But the hunger strike in Camp Liberty and different countries across the world was launched in protest to the inaction and silence of the United States and United Nations.

If the United States government had lived up to its commitments, there would be no need to endure this pain.

The silence of the United States regarding the September 1 massacre is the main factor that has allowed Maliki to keep the seven hostages in his custody for 72 days. The US’s inclination to believe the ridiculous claims of the Iraqi government of not having taken part in this crime against humanity is endangering the lives of the hostages and the residents of Camp Liberty, who are under the threat of further attacks.

Indeed, by all accounts and evidences, the September 1 massacre was perpetrated by the Iraqi government. Some might think that political interests justify denying the truth.

But the truth will eventually reveal itself. And that is why we are on hunger strike today, crying out that the seven hostages must be freed and the protection of Camp Liberty guaranteed.

President Obama must break the silence today. Tomorrow will be too late.