In what can only be interpreted as preemptive measures against the eruption of mass protests, the Iranian regime has conducted military maneuvers and imposed a repressive blockade in the area surrounding the tomb of Cyrus the Great as people rallied to site on the day Iranians celebrate the memory of the ancient ruler of the Persian empire and the founder of the first human rights charter in the world.

In a press statement, the Iranian opposition coalition the National Council of Resistance of Iran (NCRI) declared that the Revolutionary Guards (IRGC) has prevented any gatherings from taking place in Pasargadae, Cyrus’s tomb, on October 29, Cyrus the Great Day.

The statement reads, “The clerical regime this year had an insane reaction to the gathering and the commemoration ceremony of the birthday of Cyrus the Great. All the repressive organs, especially the Revolutionary Guards, did resort to every repressive trick to terrorize the society and prevent the formation of a large popular gathering in Pasargadae.

“In a statement signed by the police, it has been absurdly stated that anyone participating in the rally is subject to Article 610 of the Tazeerat Law (Book 5 of the Criminal Code of the clerical regime in Iran).”

Figure 1 statement signed by the police 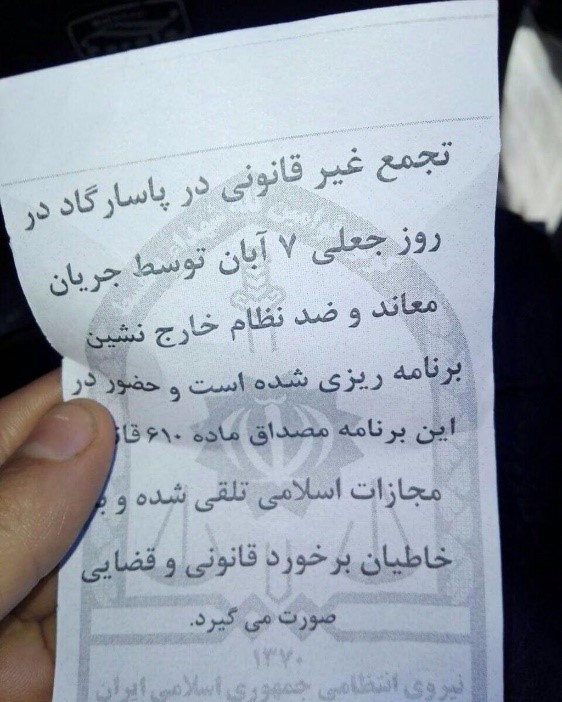 According to reports by eyewitnesses, the governor of Fars province (where Pasargadae is located) has canceled holidays for government employees in fear of gatherings and protests.

Reports obtained from the site further indicate that in spite of the regime’s attempts to block all roads to Pasargadae and setting up multiple patrols to control pathways, people have founded alternative roads and traveled through the mountains to reach the site.

The efforts of the brave people to gather in Pasargadae on October 29th have scared the regime in Iran which has long mobilized its suppressive forces to confront it.

What happened in Pasargadae on Sunday was the tip of the iceberg of the Iranian people’s hatred of the ruling regime. Recent developments in the regional and international scale are ripening the conditions for another countrywide uprising similar to the 2009 protests, and the mullahs ruling Iran are extremely terrified.

“Iran is under the control of a fanatical regime that seized power in 1979 and forced a proud people to submit to its extremist rule… In this effort, we stand in total solidarity with the Iranian regime’s longest-suffering victims: its own people,” Trump said.

Maryam Rajavi, president-elect of the NCRI, welcomed the new U.S. policy to “condemn the IRGC’s gross violations of human rights” in Iran and “to deny the Iranian regime and especially the Islamic Revolutionary Guard Corps (IRGC) funding for its malign activities, and oppose IRGC activities that extort the wealth of the Iranian people.”

According to former Saudi Ambassador to the U.S. and U.K. Prince Turki al-Faisal, who spoke at the Middle East Policy Forum in New York, “If you want to put pressure on Iran, you have to do whatever it means to do that.”

Adding to the change in U.S. policy is the resettlement of opposition members (PMOI/MEK) from Iraq to Europe, which has pumped fresh blood into the Iranian society for regime change and has caused a spike and new momentum in protests and strikes in cities across the country.