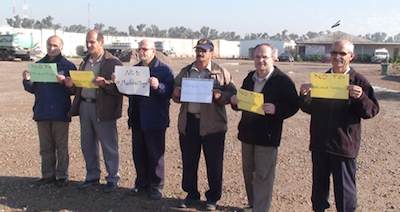 On Wednesday, 26 November 2014, patients in Camp Liberty adjacent to Baghdad International Airport held a rally protesting the medical siege imposed by the Iraqi government on the residents of this camp.

The inhumane medical siege against Iranian dissidents, members of opposition People’s Mojahedin Organization of Iran in Iraq, continues after the transfer of their protection from the US government to the Iraqi government in early 2009 and with Nouri Maliki – a political ally of the Iranian regime – coming to power in Iraq. To this day 22 of these refugees have lost their lives due to the medical siege imposed by Iraqi forces while many more are facing the threat of death.

Nearly 2,700 Iranian refugees, one third being women, are residing in Camp Liberty. The UNHCR has registered all the camp as refugees and “persons of concern” under international protection. Based on official agreements, the UN and US government have responsibilities over the safety and security of these refugees until their complete resettlement in safe countries.

Forcing the camp patients suffer is a well-known inhumane policy of the Iraqi forces associated to the Iranian regime-militias and under the command of the Iraq National Security Advisor Falih Fayyadh. 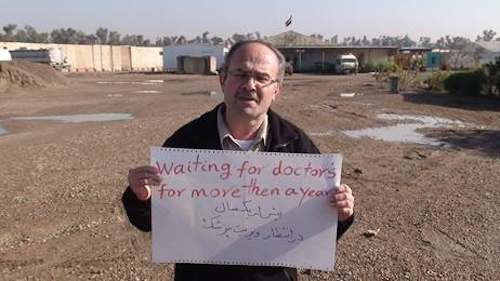 “My name is Hamid and I am detained in Camp Liberty, which is actually a prison. I am currently suffering from severe heart illness, placing me before an imminent death,” says one of the patients taking part in the rally. “It has been 19 months since Iraqi security forces have been preventing me from seeing a doctor to undergo the urgent surgery I need for my heart. Right now I am truly not far from losing my life at any moment. The UN and US, who gave us guarantees of safety, have to this day done nothing. Is there anyone out there that can be our voice?” 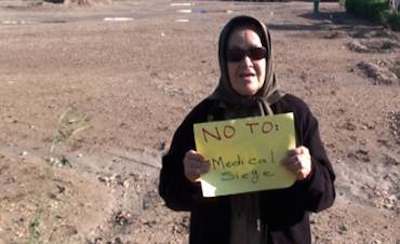 “While suffering from MS, I am currently living in dangerous conditions,” said a lady by the name of Monir, standing amongst the protesters holding a placard written “NO TO Medical Siege. “However, due to the medical siege imposed on us by Iraqi forces it has been six months since I was last able to see a medical specialist in Baghdad, and each time my appointments are cancelled due to Iraqi forces’ stonewalling.” 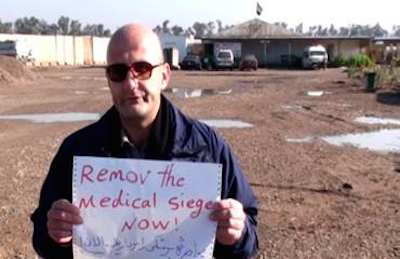 “My right eye was hit by shrapnel in a missile attack nearly two years ago in Camp Liberty,” says another patient by the name of Isa. “This is a serious wound and has been the reason why I have lost most of my vision. This is while it could have been avoided. However, Iraqi security forces controlling Camp Liberty kept on obstructing and raising bogus’ reasons preventing me from going to a physician. As a result I have lost vision completely in my eye and my other eye is also going blind.”

Camp Liberty is currently facing a humane and human rights crisis. Considering the moral and legal commitments and responsibilities on the shoulders of the US government and UN over Liberty residents’ safety and security, an urgent intervention to end the camp’s medical siege and provide residents with open access to medical services is the only way to prevent the continuation of this crisis and its lethal consequences.