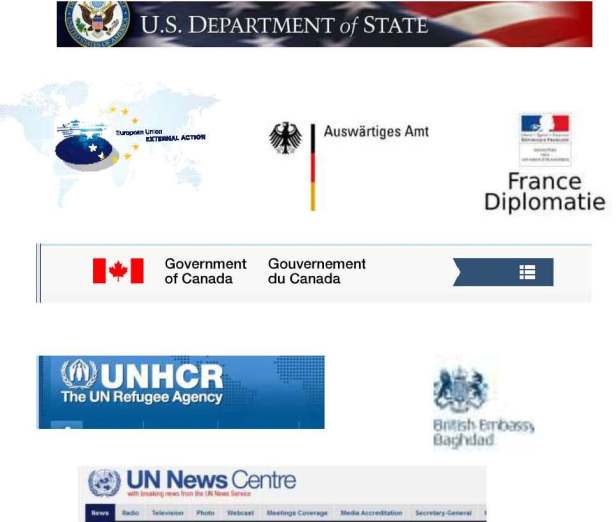 The fourth missile attack by Iraqi forces on Camp Liberty, dating December 26, 2013, in which three residents were killed and 70 injured, has raised worldwide international condemnation. But Maliki’s government has made it clear that it has no inclination to protect the lives of the residents from further attacks and intends to continue the slaughter of Camp Liberty’s residents.

“The United States condemns in the strongest terms today’s rocket attack at Camp Hurriya that has reportedly killed and injured camp residents,” Jen Psaki, the US State Department Spokesperson, said in a statement issued on December 26, 2013. In the same statement, the US State Department Spokesperson called on the Government of Iraq to provide security measures for Camp Liberty, declaring, “We continue to call on the GOI to take additional measures to secure the camp against further violence, including by immediately installing additional protective barriers, such as bunkers and t-walls. We also call on the GOI to continue to honor its obligations under its December 25, 2011 agreement with the UN and urge the Iraqi Government to find the perpetrators and hold them accountable for the attack.”

The French Foreign Affairs Ministry condemned the attack that took place in the vicinity of the Baghdad Airport on December 26 against a refugee camp, and called on the Iraqi government to take the necessary measures to ensure the security of the camp.

The Chargé d’Affaires of the British Embassy in Baghdad said, “I condemn the attacks on pilgrims, Christians and on Camp Liberty that have taken place over the past few days in Iraq. My condolences go to the families of those who have been killed and my best wishes for a speedy recovery to those who have been wounded.”

In a joint statement, John Baird, Canada’s Foreign Affairs Minister, and Chris Alexander, the Minister of Citizenship and Immigration, declared, “Canada condemns yesterday’s rocket attack on Camp Hurriya, near Baghdad, which killed and injured residents of the camp.” Regarding the continued threats to the lives of the residents and the poor state of security in the camp, they said, “Canada will raise its concerns directly with Iraqi officials, urging the Government of Iraq to ensure the safety of residents.”

UNHCR, the UN refugee agency, condemned the attack in a press release, declaring, “The UN refugee agency strongly condemns last night’s attack on the Baghdad International Airport Zone, during which a number of rockets landed on Camp Hurriya – reportedly killing three and injuring many more in the camp.” The UNHCR also called on the Iraqi government to step up the security measures for the safety of the camp’s residents. The statement said, “UNHCR remains deeply concerned for the safety of the residents of Camp Hurriya and is calling on the government of Iraq to urgently scale up security measures in the camp to ensure the safety and security of its residents.”

Nickolay Mladenov, Special Representative of the Secretary-General and Head of the UN Mission for Iraq, condemned the latest attack on Camp Liberty, and called on the Iraqi government for immediate action to ensure that appropriate measures are put in place to maximize the security of the residents.

In spite of international concern for the safety of the camp’s residents, the Iraqi government still hasn’t taken any measure to enhance the security of the camp and to protect the lives of the residents, betraying its intention to continue the murder of PMOI members in Iraq. This proves that merely relying on the Iraqi government will not remedy the situation, and concrete measures must be taken by the international community, namely the US and UN, to protect the residents from further attacks, a fact that the residents have made note of time and again, but have been ignored by the concerned parties.