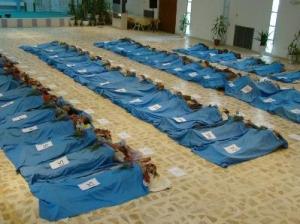 Following the massacre of the residents at camp Ashraf by the Iraqi forces, the residents of camp Liberty signed a letter addressed to Sec. General Ban Ki-Moon urging him to act immediately upon their demands. Following is a copy of the letter.

In the grave massacre at Camp Ashraf on 1 September 2013, criminal Iraqi forces murdered 52 residents and took 7 others hostage. Ashraf residents, members of the People’s Mojahedin Organization of Iran, are political refugees and ‘protected persons’. This criminal massacre was carried out by Maliki’s government at the behest of the religious dictatorship ruling Iran, during which the attackers executed unarmed individuals while their hands were tied behind their backs and in coup de grace style. The attackers also opened fire on the wounded residents in a clinic inside the camp, murdering all of them. By all definitions and standards, this is a grave crime against humanity and a war crime.

As you already know, 100 of Ashraf residents remained in the camp based on a quadripartite agreement between the US government, Iraqi government, United Nations and the residents – signed on 17 August 2012 – in order to protect the property of Ashraf and Liberty residents. The US Secretary of State’s Special Advisor on Ashraf had stipulated the stay of these individuals in Ashraf bears no time limit.

Considering the fact that the 3,000 Camp Liberty residents and Camp Ashraf residents, including the 52 recently killed and the seven taken hostage, are all ‘protected persons’ under the Fourth Geneva Convention, and according to the United Nations High Commission for Refugees are considered ‘asylum-seekers’ and ‘people of concern’; and considering the fact that the possibility of a repeat of such massacres is probable at any moment, we Liberty residents will continue our hunger strike until the complete stoppage of killings in Ashraf, the release and return of those taken hostage, and resolving of the issue of protection for Ashraf and Liberty residents. The security of Ashraf and Liberty residents will only be provided through the eviction of Iraqi forces and stationing of UN blue-helmet units in Ashraf and Liberty until the residents’ transfer to the US or Europe.

There is no doubt that if immediate and firm action is not taken for the release of the seven residents taken hostage from Ashraf, all of them will quickly be delivered to the fascist mullahs, and thus tortured and executed. The US government and UN are responsible vis-à-vis their safety and security. As a result, they must intervene immediately for the release and return of the hostages.